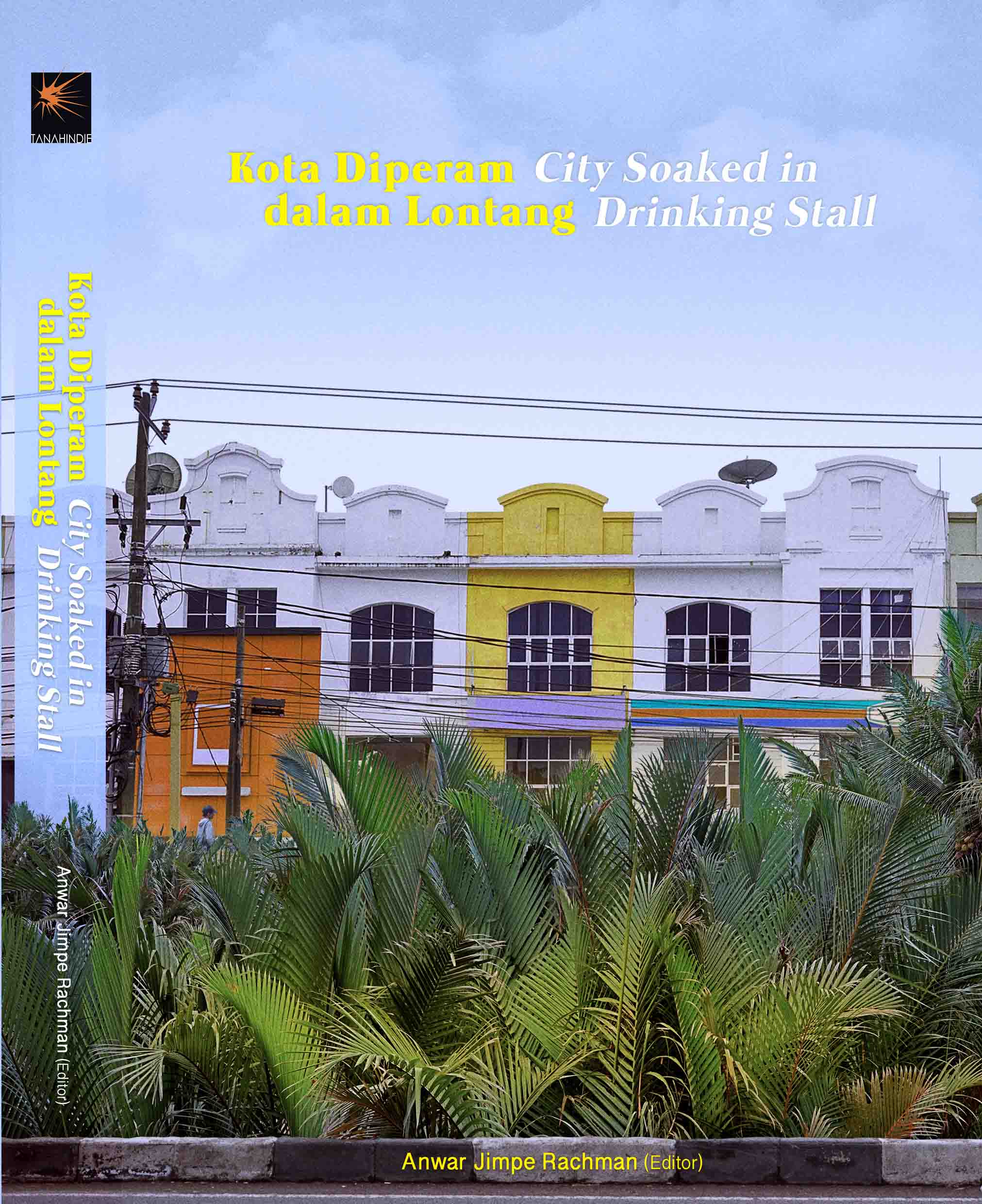 LONTANG is the local word for traditional drinking stall which many can be found in Makassarese settlement area, especially at the southern of Sulawesi Island. It has the same appereance of any common stalls, benches facing each other with a table between them, and serves only one menu: ballo’ (palm wine).

Having a conversation while sipping palm wine, the visitors unwind their twisted mind about everyday life, entertain themselves after work, or joke and mock with no regard of social strata. This wooden stall with bamboo pillars often time becomes a “sanggar”, training place for a local singer to sing and prepare before performing in front of public in the future, said Sese Lawing, a friend who wrote many songs with Makassarese lyrics, in 2013.

The raw ingredient for the main menu of the lontang (drinking stall) is the water sapped from the nypa stalk. The plant with scientific name Nypa fruticans grows at the riverbank, marsh land, and at the northern coast of Makassar and the surrounding area, especially around Pampang and Lakkang Isle area. These two areas split by the Pampang River is the place for pange’ba (nypa sapper) from Rappokalling, Tallo, Pampang, and Lakkang to gather the main ingredient of ballo’.

Nypa plants, which grow along with mangrove trees, at the Pampang and surrounding area appear to be the last hope for city who grows on marsh land such as Makassar. Nypa trunks and mangroves are the safety green belt for the development of the city, although particularly the nypa is at the decline. The area have also seen the decline of the mangrove because of its utilization as the main material for firewood in 1960s and 1970s.[1]

This Pampang area is also the background of the story of a pange’ba that constitute the beginning pages of human narration collected in this book. The story that was written by Wilda Yanti Salam describes in detail the life of the Nypa sapper, his family, and the community that supported his existence, and Pampang where in the past was a nypa forest has slowly being land filled and surely turned into a residencial area.

One day soon before the rainy season in 2012, I took a trip to Lakkang Isle, an isle encircled with nypa plants that grew at the bank of the Tallo River and Pampang River. At these riverbanks I saw with my own eyes how all kind of trash—plastic wastes, [2] fabrics, even ropes—trapped between the dense of the brown nypa trunk with its green shoots amidst the black water from the mix of all sort of wastes from Makassar. The stinking water that I had to cross was like a chemical water from a fail laboratory experiment. The odor suffocated as if in a tight room; blocked the oxygen even though I was actually in an open air. However, that horrific sight in the beginning was immediately turned into poetical athmosphere. All was because of the plastic bottles ex mineral water container that attached at the nypa trunks, as if they were suckling and sapping the water that indeed seemed like a milk.

There was a chain of life that I realized at the moment. The city and we threw those trash and wastes there, the river. The nypa trees then filtered all those stinking wastes, before handed over to the delta and the sea. Those trees also hold the soil that we step on so it did not fall and carried by the waterflow. The nypa also cleaned our waste water and turned it into ballo’ for the pange’ba. The nypa and the pange’ba took and gave each other. Maybe the nypa wine was the only reason that the nypa plant was still abundant in the area. That was why, people in Makassar must thank the pange’ba, lontang, and the ballo’ that was drunk by those who were marginalized and perhaps would be force evicted due to the development of the city. Ever since, I came home with a definition: Makassar is a city soaked in drinking stall.

HOWEVER lontang life that was written by Wilda Yanti Salim was just a drop of an example from a sea of human lifes in this city. Another drop that fell into this book City Soaked in Drinking Stall was the story of a special needs child written by Fakhika Anugrah Prastica, playing pattern and developmental growth of the children in city by Rahmawati, story about migration of a certain community (Massenrenpulu) to Makassar by Hajra Yansa, narration about a scavenger family by Rusli, and Achmad Teguh Saputro who wrote about several families who were farming in urban area.

These six writers are a group of youth who (unintentionally!) come from different academy and university in Makassar. They were the result of the selection of the program “Youth and City” that was held by Tanahindie, Januari-July 2018. They participated in weeks of workshop (not including unscheduled meetings when they came separately for a consultation).

Besides them, in almost the same time, Tanahindie also made a residency program for young people who was interested in art world. Tanahindie opened this program to expand the dimension and other possibility related to the perspective of the youth towards the city they lived in, especially from the audio and visual aspects. Those who were involved were Andi Thezar Resandy (audio), Aziziah Diah Aprilya (photography), Ibe S. Palogai (photography), dan Wildan Maulana (videography).

Their stories either in the form of series of alphabet or picture and audio in this book are the same with what they encounter in the field, with some polishing and suggestions during weeks of workshop in a participatory class. They were actively involved in giving their suggestions in every writing when they presented what they had been studying and the progress of each of their writings.

They admitted, that this was their first and was very different with what they had before. They realize that data was everything. Even more, some of them made their decision about the subject of their studies only after the fourth or fifth meeting.

Why it took so long? During workshop, I found them tried so hard to change their perspective. On some early meetings, they assumed themselves as a “researcher” who kept some distant and observed something that was “far” from themselves—where unfortunately, they did not even have the analytical knife. When, the most important thing that was expected from their perspective was the more descriptive, detail, no distant, and ‘honest’ writing as the person who directly observed a phenomenon or a happening. They wrote because of ‘experiencing’—whether a contact through the ethnic-religion background, interest, or a simple cause for example they lived (temporarily) in the area.

In this way, Tanahindie wants to underline that intimate observation and experience of a person is an important thing that must not be neglected, just like what happened to house yard as a neglected space and sphere. Utilizing “house yard” as a locus and a mindset is the path of Tanahindie. Calling it locus means as the place to held workshop meetings; as for the mindset means as the vernacular perspective.

The presence of this collection of stories, I believe, has multiple use, among them are; first, fills the narration of the city with the perspective of the youth. Sooner or later, these data that they collected will soon become an important reference as well as alternative for people who wants to delve deeply in urban studies; second, the presence of these stories at the same time challenges the big narrations that was made by the “government” and the “bussiness man” by giving alternative narration (counter-culture).

Sooner or later, small work like this always has the potency to give huge impact. Young people rarely have space. In the family, they must get out of the house to express their mind. In another field, they only become an object that is considered merely as numbers for a dimension of life that seemed too narrow, that is electoral politic. [3] In this book, they stressed their perspective, expressed without hesitation where they stand, about the city they live in—momentarily or permanently.

Lastly, this story with temporal-physic of a book could only be collected with the support of so many people, i.e. Stichting Doen, Arts Collaboratory, Penerbit Ininnawa, and Makassar Nol Kilometer DotCom (http://mks0km.id), The Ribbing Studio, Yayasan Makassar Biennale, Kedai Geraderi, and many help from other acquintances and friends.[] 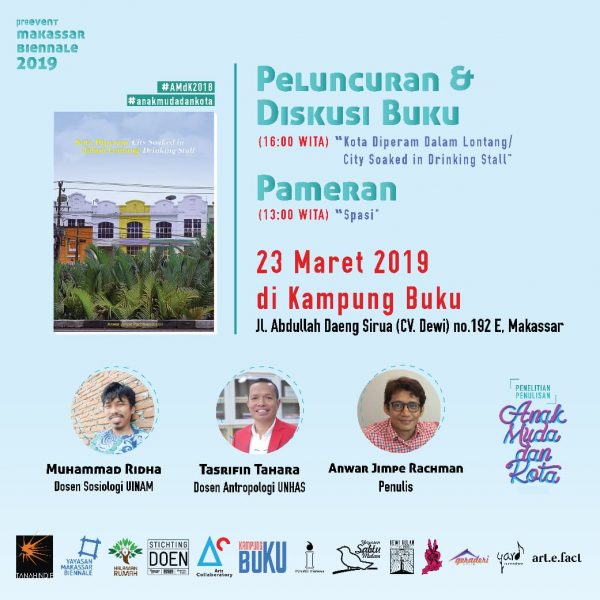 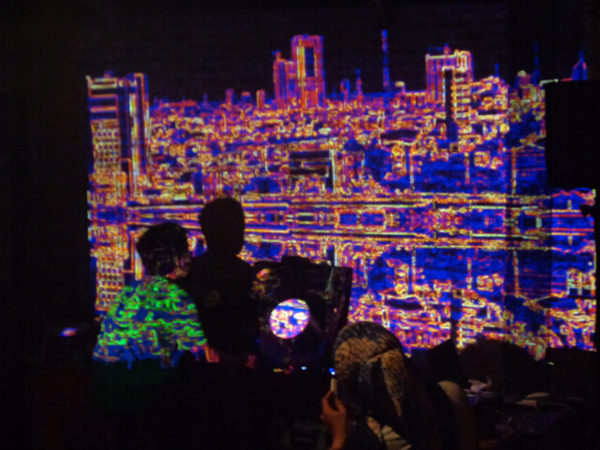